Muhammad Fazilov was born in Pakhtabad, Uzbekistan, in 1959. The artist graduated from the Faculty of Architecture and Restoration of the Samarkand Architecture and Construction Institute. At the same time, he graduated from the Poster Department of the Faculty of Public Professions.
Since 1987, he is a member of the Union of Architects of Uzbekistan. Since 1988, he is a member of the Union of Designers of Uzbekistan and a member of Uzbekistan Art Academy. In 2016, he became a member of “Turon” Academy of Sciences. In 1999, he held solo exhibitions at Tashkent Yesenin Museum and in 2016 at Uzbekistan Academy of Art. Muhammad Fazilov worked in various companies in the fields of design, architecture and monumental art. Between 2004 and 2006, he taught at Tashkent Institute of Architecture. Between 2006-2014, he worked as an architect and design consultant at “Uznur” company.
He is the head of the restoration department of “Oltin Meros” Charity Foundation. She is the author of three books: “Secrets of Ancient Symbols”, “Sign, Color, Symbol”, “Psychological perception of color”.
Muhammad Fazilov is a participant of many national and international art exhibitions and projects, and the creator of various conceptual projects, installations and video art. His works are in various private collections in Uzbekistan and abroad. 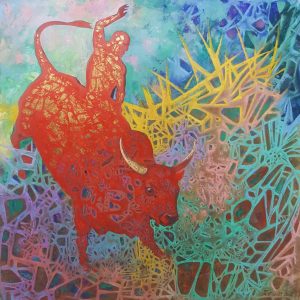