He was born in Kyrgyzstan in 1957. Currently he has been participating in creative works and preparations for solo exhibitions. In 1976, he became an assistant to the artist in the film “Arman” (screening of the film “Meeting with the Son” by K. Aitmatov). In 1989 he became an intern at the Paris International City of Fine Arts. From 1986 to 1991 he was a teacher of the Kyrgyz State Art School in painting, drawing, composition. In 1994, he became an art director in the film “The Source”. In 1998, he performed as an art director in the film “Winter”. In 2012, he performed as an actor and an art director in the film “Princess Nasik”. In 1979, he participated in the Youth Exhibition in Moscow. In 1987, he participated in the exhibition titled “Ten Young Artists of the USSR” in Germany, Italy, and Spain. In 1987, he took part at an exhibition-fair in Poland. In 1988, he received a first degree diploma for active participation in the 1st Inter-Republic Youth Exhibition of the Republics of Central Asia and Kazakhstan (received from the Ministry of Culture of the Uzbek SSR). In 2002, he became the winner of the G. Aytiev Award. In 2016, he received an honorary diploma of the Kyrgyz Republic. In 2016, he became the laureate of the S. Chuikov Award. In 2017, he received a diploma from the Academy of Arts of the Republic of Kazakhstan for his contribution to the development of friendship and mutual understanding between the Kyrgyz Republic and Kazakhstan and the strengthening of cultural ties. 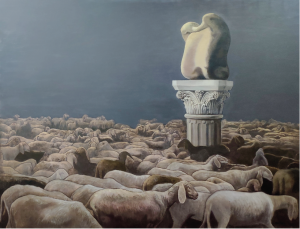