Rakha Itikeyev was born on November 22, 1996, in the village of Birlik in At-Bashy district, Naryn region. In 1995, he graduated from the Faculty of Graphic Arts of the K. Tynistanov Issyk-Kul State University. Between 1987-1989 worked as an art teacher at high schools. In 1995, he became a lecturer at K. Tynistanov Issyk-Kul State University. Between 2005- 2009, he was employed as a techer at the Arabaev Kyrgyz State University. Since 2007, he has been a member of the Union of Artists of the Kyrgyz Republic. He is a participant of national and international exhibitions. In 2012, he won the top award in “Asian Reunification on the Silk Road – Japan”. 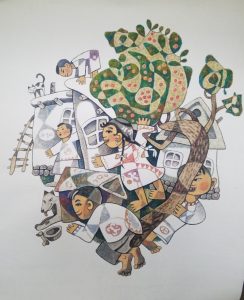