He was born on July 17, 1960, in the village of Magda, Paphos. He completed his primary school education at the village school and then completed the secondary school at Poli Şehit Turgut Secondary School. During this period, he took painting lessons from Ali Atakan. After 1974 he moved from Magunda with his family to Nikita. While continuing his education at Güzelyurt Kurtuluş High School, he took painting lessons from Emin Çizenel. He carried out his undergraduate education at the Faculty of Education, Department of Teaching Painting of Gazi University between 1978-1982. After graduation, in 1984-1985 academic year, he worked as a primary school teacher in Bahçeli Village. After working as a graphic designer during 1985-1986, he was appointed as a fine arts officer at the Fine Arts Department of the Ministry of Education and Culture in 1987. He was appointed as a teacher to the Atatürk Teacher College in 1991 and as a lecturer to the Atatürk Teacher Academy in 2000. In 2003, he received her master’s degree from the Department of Educational Administration, Supervision, Economics and Planning, Institute of Educational Sciences, Near East University, with a research thesis on “Opinions of Elementary School Teachers on the Application of Elementary School 4th Year Mathematics Course and Painting Programs in Support of Each Other”. He completed his doctorate (Ph.D.) at the Near East University, Faculty of Fine Arts and Design in 2017 with a thesis titled “Analysis of Cyprus Archaeological Cylinder Seals and Their Reflections on Printing”. His works have been exhibited in three solo exhibitions and several mixed exhibitions. Some of his works have been owned by the state collection and private collections. He retired from his post at the Atatürk Teacher Academy in 2016. He is currently working as a department chair and lecturer of the Department of Plastic Arts at the Near East University, Faculty of Fine Art and Design. He is also continuing his artistic works besides teaching. 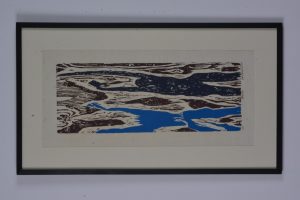