Artist Osman Atila Keten presented his 27 paintings and 4 pieces sculpture at his solo exhibition titled “Touching Existence” for the Cyprus Museum of Modern Arts at the exhibition hall of the Dentistry Faculty.

According to the information given by the Press and Public Relations Directorate of Near East University, the opening of the solo exhibition of the artist Osman A. Keten, consisting of 27 paintings and 4 sculptures, attended by Near East University Founding Rector Dr. Suat İ.Günsel, Vice-Rector Prof. Dr. Tamer Şanlıdağ, institute directors, lecturers, artists, and guests.

Artist Osman A. Keten, art historian Mine Keten, and Vice-Rector Prof. Dr. Tamer Şanlıdağ made a speech each at the opening ceremony.

Keten continued as follows; You know, in the fresco of Adam, the creation of Adam, God gives life to him by touching the finger of Adam, but in return, he comes to life as God. Otherwise, how would God bless his Godness if the man was not created? And the human beings created a thousand years later became so reckless that they began to gnaw and destroy the world in which they were born. So, Touching the Existing is a beginning that requires attention and sensitivity. I guarantee that you will see these impressions in my exhibition soon.”

Then, the daughter of Artist Osman A. Keten and art historian Mine Keten stated that Modern Art, which prevailed between the 1850s and 1950s, aimed to break away from the tradition, and after the Second World War, Modern Art Movements were based on the concept of abstract expressionism. She emphasized that it would not be possible to say that there is a complete rupture between Modern Art and Contemporary Art as it constitutes the structure.

Mine Keten: “According to artist Osman A. Keten, art is the language of transcendental”
Stating that Osman A. Keten created an existential resource to capture the essence of existence, Mine Keten said; “For him, art is the language of transcendental. And it is only true to the extent that it can touch the sense of existence in its origin and meet the deep spiritual need in it.”

Prof. Dr. Tamer Şanlıdağ: “Turkish Cypriot picture has taken important steps towards modernization”
Near East University Vice-Rector Prof. Dr. Tamer Şanlıdağ, on the other hand, stated that the Turkish Cypriot painting has taken important steps towards modernization in a process that can be considered quite short in the history of art. Underlining that the Turkish Cypriot painting, which has a very short history, extends from figurative to expressionist and abstract expressionists.

Prof. Dr. Şanlıdağ continued his words saying that despite the fact that the Turkish Cypriot painting, which followed parallelism with the modernization movements in art, dates 80 years back. Prof. Dr. Şanlıdağ; “In the 1950s, with the search of the Turkish people to have a social structure, the efforts of the educators and painters to return to the island after having training in Europe in the sense of catching modernity in the Turkish Cypriot painting began to be observed for the first time.

Prof. Şanlıdağ: “Osman A. Keten will touch the existence today. Osman A.Keten, one of our precious artists, will be the owner of the exhibition, which will be the 349th exhibition of the Cyprus Museum of Modern Arts, today. I would like to thank our artist on behalf of my university for his contribution to the Cyprus Museum of Modern Arts and the Turkish Cypriot Painting Art."

After the speeches, award presentation, bust opening, exhibition ribbon cut realized
After the speeches, Vice-Rector Şanlıdağ presented the FERGÂNÎ AWARD to artists Osman A.Keten, which is given within the scope of the Alasia Awards. Then, the bronze bust of artist Keten, which was made by Kyrgyz Sculptor Nurlan Kebek Uulu, was opened by Founding Rector Dr. Suat. İ. Günsel. Following this, the ribbon of the exhibition was cut. The Cyprus Museum of Modern Arts, which has hosted 349 exhibitions so far, contains more than 100 thousand works. Exhibitions can be visited between 08.00-16.00 at the Dentistry exhibition hall until July 24, 2020. 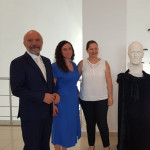 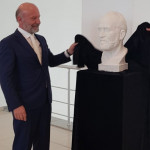 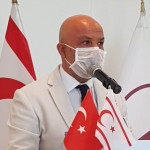 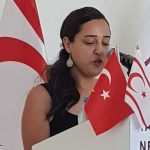 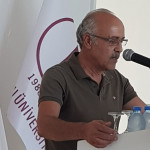 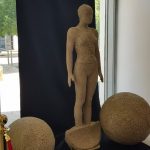 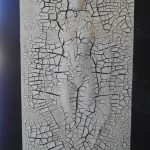 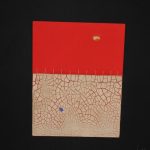 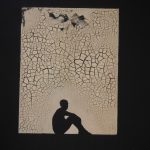 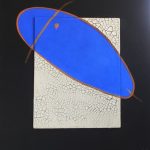 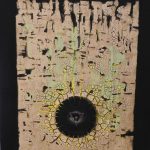 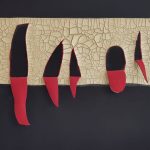