From Nusret Minelayer to Queen Elizabeth, the Dardanelles Naval Warships Collection Exhibition, which consists of 26 ship models in 1/100 scale, one-to-one scaled naval mines and torpedoes, and a rich collection that is unique in the world, depicting scenes from the war, opened at the Eastern University Grand Library Exhibition Hall with the participation of Turkey’s Ambassador Ali Murat Başçeri 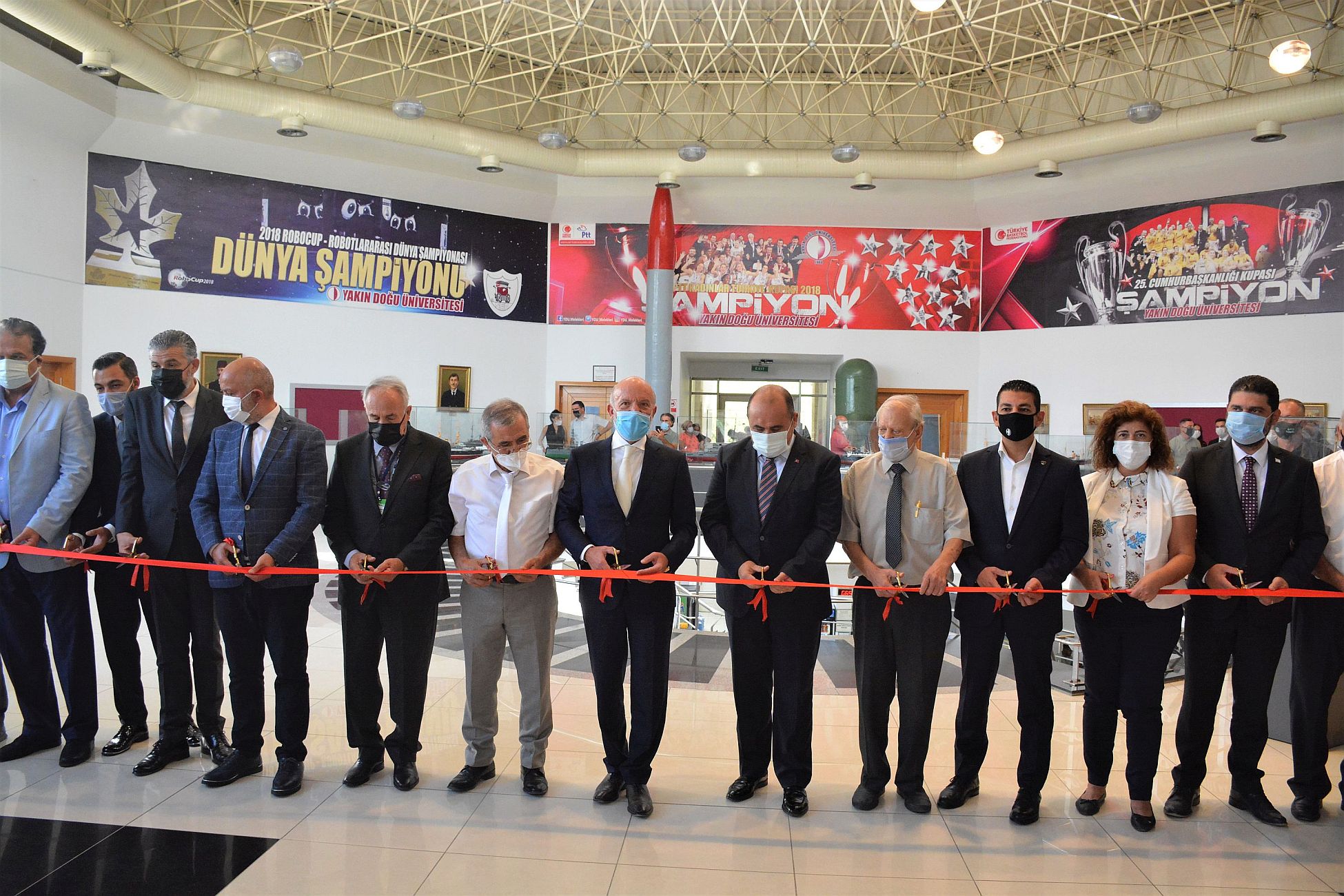 Attracting great attention with its collections that bring contemporary art together with history, the Cyprus Museum of Modern Arts has brought the Dardanelles Naval Battle, which had important effects not only in Turkish history but also in world history, to the present day with a uniquely rich collection. Dardanelles Naval Warships Collection Exhibition, opened by Turkey’s Ambassador to Nicosia Ali Murat Başceri at the Near East University Grand Library Exhibition Hall, includes 26 ship models in 1/100 scale from the Nusret Mine Ship to Queen Elizabeth, one-to-one scale sea mines and consists of works depicting scenes from war with torpedoes. The exhibition will be open to visitors free of charge until the end of September.

The Battle of Dardanelles, which has a very important place in Turkey’s liberation struggle and where land and sea battles took place, is one of the wars that most affected not only Turkish history but also the course of European history. In the war that took place 106 years ago, the United Fleet, consisting of British and French warships, was planning to pass through the Dardanelles and besiege Istanbul and seize control of the straits along with the surrounding regions. The Turkish side, which did not allow the British and French allies to pass through the channel in the naval battle that took place on March 18, 1915, forced the Allied Powers to withdraw despite the tens of thousands of losses in the land war that lasted for months in the following period.

From Nusret Minelayer to Queen Elizabeth, the Battle of Dardanelles is at the Cyprus Museum of Modern Arts!
The Dardanelles Naval Warships Collection Exhibition, opened in the exhibition area of the Near East University Grand Library, brings the most famous Turkish, British and French ships of the period to the present in the form of 1/100 scale realistic models of the 26 ships that took part in this epic war. At the same time, one-to-one scale models of the torpedoes that Muavenet-i Milliye sank many ships, especially the Royal Navy preliminary dreadnought HMS Goliath, which had the state-of-the-art technology of the period, and the naval mines that Nusret Minelayer Ship sank 3 large warships named Irresistible, Ocean and Bouvet. The portraits of Captain Ahmet Saffet Ohkay, the captain of the Muavenet-i Milliye and Captain İsmail Hakkı Bey from Tophane, the captain of the Nusret Minelayer, and the works depicting the Dardanelles Naval Battle, also bring this epic lived 106 years ago to the present day for its visitors.

Turkish ships Nusret Minelayer, Muavenett-i Milliye, Gülcemal, Alemdar, Aleppo, Sultanhisar and Ertuğrul, which played very important roles in the Dardanelles War, are also included in the collection along with the Bandırma Ferry, with which Mustafa Kemal Atatürk sailed to Samsun to start the independence war, and Atatürk’s private yacht Savarona. In addition, warships with the most advanced technology of the period, such as the British and French ships Suffren, Inflexible, Irresistible, Goliath, Lord Nelson, HMS Triumph, Charlemagne, Queen Elizabeth, Bouvet, Ocean which tried to pass Dardanelles but failed to do so, are among the most important pieces of the collection. Realistic models vary in size from 1 to 1.5 meters.

At the opening ceremony of the exhibition, which started with an impressive documentary about the Dardanelles War shown at the Near East University Grand Library, Turkey’s Ambassador to Nicosia Ali Murat Başçeri and Near East University Deputy Rector Tamer Şanlıdağ made speeches.
In the Dardanelles Naval Warships Collection Exhibition, the ships built with 20 years of effort by artist Vural Or and the Nusret Minelayer made with a great effort by Near East University PhD student İsmail Gündoğan attracted great attention and admiration along with torpedos and sea mines made in one-to-one scale.

“The main duty of the Ottoman navy was to protect the capital city, especially after the losses in the Battle of Lepanto. The Dardanelles Naval Battle is one of the last successful missions of this navy,” said Ambassador Başçeri, and continued as follows, “I am proud to say that the modern Republic of Turkey is a country that is building its own aircraft carrier today and is advancing confidently into the future.” Emphasizing the guidance of history, Başçeri said, “History is one of the branches of science that is understood when read and sheds light on the future when understood. The age we live in is the age of visuality and artificial intelligence. Therefore, it is very important to teach history to the generation born in this age. These valuable works, where art and history meet, serve exactly for this purpose.” Stating that the progress and achievements of Near East University with rapid steps since its establishment are admirable, Başceri said, “I would like to thank all the Near East Family, especially to Founding Rector Dr. Suat Günsel, who is always in an attempt to reach better, and to everyone who contributed to bringing this historical richness to us.”

Prof. Dr. Tamer Şanlıdağ: “The Dardanelles Naval Warships Collection Exhibition is a touchstone in terms of the art atmosphere created by the museums founded by Near East University.”
Stating that Dardanelles Epic, which has a very important place in the struggle for the foundation of modern Turkey, is at the forefront of the wars that deeply affected not only Turkish history but also world history, Near East University Deputy Rector Prof. Dr. Tamer Şanlıdağ said, “When the Allied Powers led by Britain and France came to Dardanelles, they looked at the Ottoman Empire, which was in its last days, as a sick man; They thought that their navy, which they considered it undefeatable, would easily pass through the Dardanelles and anchor in Istanbul and that the Turks would withdraw from the stage of history without a significant resistance. However, the Dardanelles Naval Battle turned into an unforgettable epic telling to the whole world that the Turkish nation and their state will continue to exist in this geography, that the Turkish people have the determination and the spirit to tighten their roots to their lands even at the darkest times of the history.

Stating that this unique exhibition, which is in the inventory of the Cyprus Museum of Modern Arts and is the 381st exhibition, offers the opportunity to witness the essence and spirit of this epic written 106 years ago, here in Northern Cyprus, Prof. Dr. Şanlıdağ said, “The Dardanelles Naval Warships Collection Exhibition, which brings the 26 ships that took part in the Dardanelles Naval Battle to the present with their 1/100 scale realistic models, brings you the most famous Turkish, British and French ships of the period with all their details. At the same time, one-to-one scale models of the torpedoes that Muavenet-i Milliye sank many ships, especially the Royal Navy preliminary dreadnought HMS Goliath, which had the state-of-the-art technology of the period, and the naval mines that the Nusret Minelayer sank 3 large warships Irresistible, Ocean and Bouvet, increases the power and impact of the unique exhibition many times over. The portraits of Ahmet Saffet Ohkay, the captain of the Muavenet-i Milliye and Captain İsmail Hakkı Bey from Tophane, the captain of the Nusret Minelayer, and the works depicting the Dardanelles Naval Battle will also make us relive this epic that happened 106 years ago. I believe that the Çanakkale Naval Battle Collection Exhibition is also a touchstone in terms of the art atmosphere created by the museums founded by Near East University.”

Emphasizing that this collection, which is unique in the world with its scope and richness, is the result of years of effort and experience, Prof. Dr. Şanlıdağ said, “The Nusret Minelayer, prepared with great effort by our Near East University PhD student artist İsmail Gündoğan, with the ships built by artist Vural Or with 20 years of effort, allows the legendary atmosphere of the Dardanelles Naval Battle to be revived in our brains, hearts and souls. No matter how much we are thankful to our esteemed artists, it is not enough for their efforts.”

Continuing his speech, Prof. Dr. Şanlıdağ said Near East University undertook the mission of leading social progress by bringing art, history and science together. Prof. Şanlıdağ finalized his speech by saying; “Our domestic and national car GÜNSEL, of which mass production works are continuing at full speed on the Near East University campus, the domestic PCR Diagnosis and Variant Analysis kit of the TRNC, of which design and R&D studies were completed within our university, COVID-19 preventive nasal spray which we are an international project partner, and the vaccine development projects we carry out in our Viral Vaccines Research and Production Center on many viral diseases, especially COVID-19, are the results of an important vision that will carry our university, country and society to the future.” 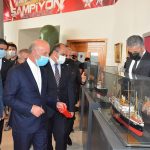 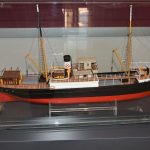 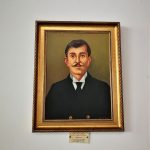 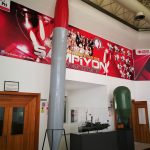 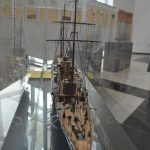 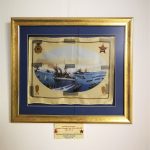 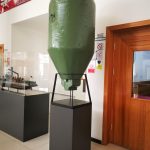 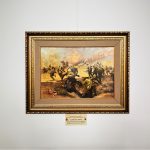 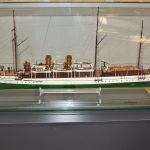 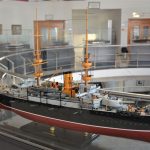