Four solo exhibitions, bringing together 90 works of painting, sculpture and stained glass exclusively prepared for the Cyprus Museum of Modern Arts, were opened by the Minister of Labor and Social Security Hasan Taçoy at the Near East University Communication Faculty Exhibition Hall 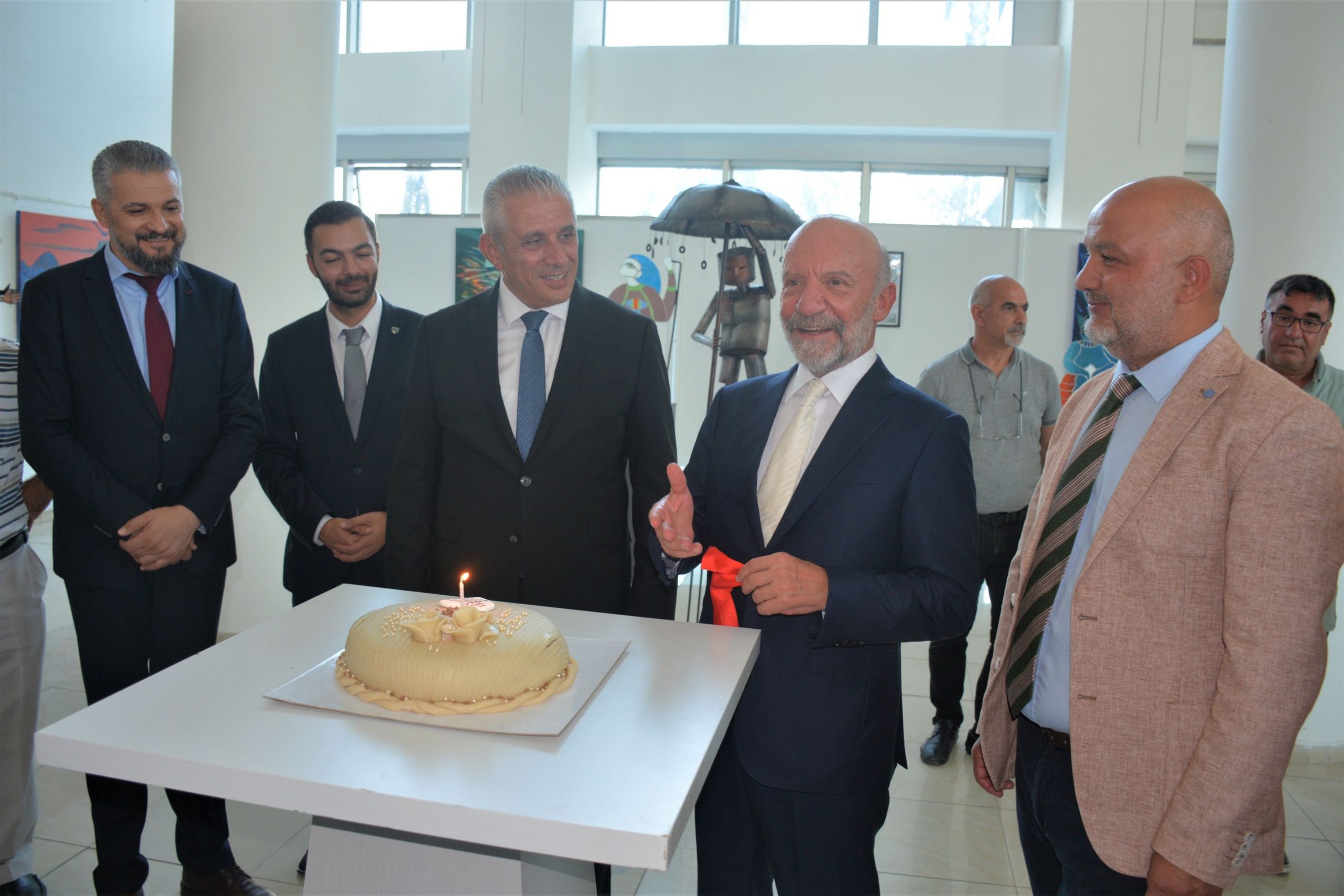 Solo exhibitions of Khasan Aminov, İsmail Gündoğan, Gazi Gündoğan and Sinem Akın Kılınç, which brought together 90 works of art, sculpture and stained glass with art lovers, were opened by Hasan Taçoy, Minister of Labor and Social Security, at the Exhibition Hall of the Near East University Faculty of Communication. Exhibitions consisting of works exclusiely prepared for the Cyprus Museum of Modern Arts can be visited free of charge until Wednesday, August 17th.

At the opening ceremony of the exhibitions, artist Khasan Aminov, Near East University Acting Rector Prof. Dr. Tamer Şanlıdağ and Minister of Labor and Social Security of the Turkish Republic of Northern Cyprus Hasan Taçoy made speeches.

After the speeches; Within the scope of the “Alasia Awards”, the Ibn-i Tufeyl award was presented to sculpture artist Sinem Akın Kılınç and the Fergani award given to painting artists was presented to Gazi Gündoğan by the Minister of Labor and Social Security Hasan Taçoy. 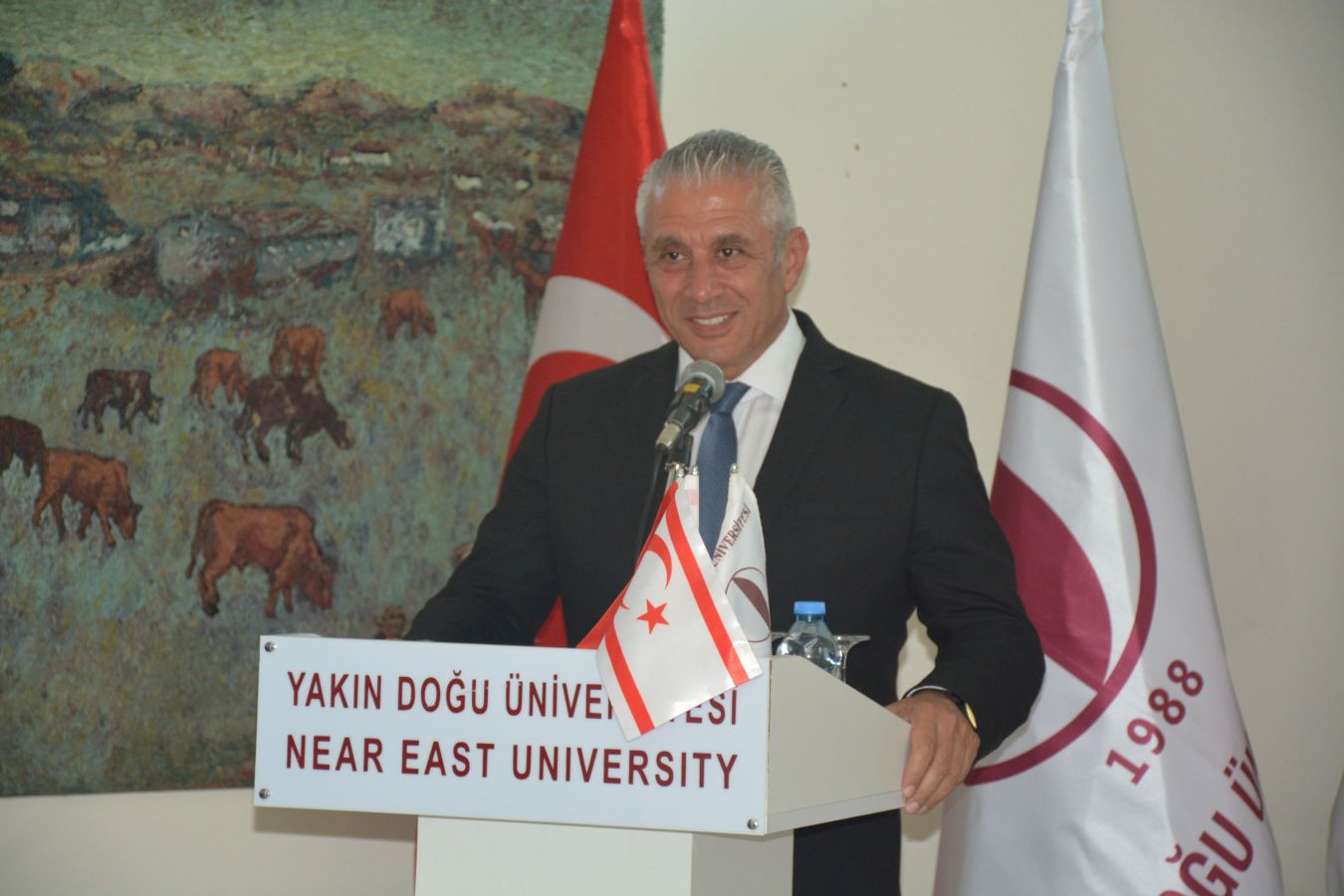 Emphasizing that the Suat Günsel State Primary School Famagusta and the Near East University Yeniboğaziçi Medical Faculty Hospital and Yeniboğaziçi Grand Library, which will be opened in the same region by the Near East Enterprises in the coming months, Minister Taçoy said, “It requires a great organization and management skills to be able to successfully carry out so many projects at the same time in such different fields as art, health and education. The Near East Enterprises definitely have all these. I believe that the most important driving force of this is the wholehearted commitment to this country.”

Minister Taçoy, at the end of his speech, saying that Near East University Founding Rector Dr. Suat Günsel had great efforts on many people, including himself in this country, celebrated his 70th birthday. 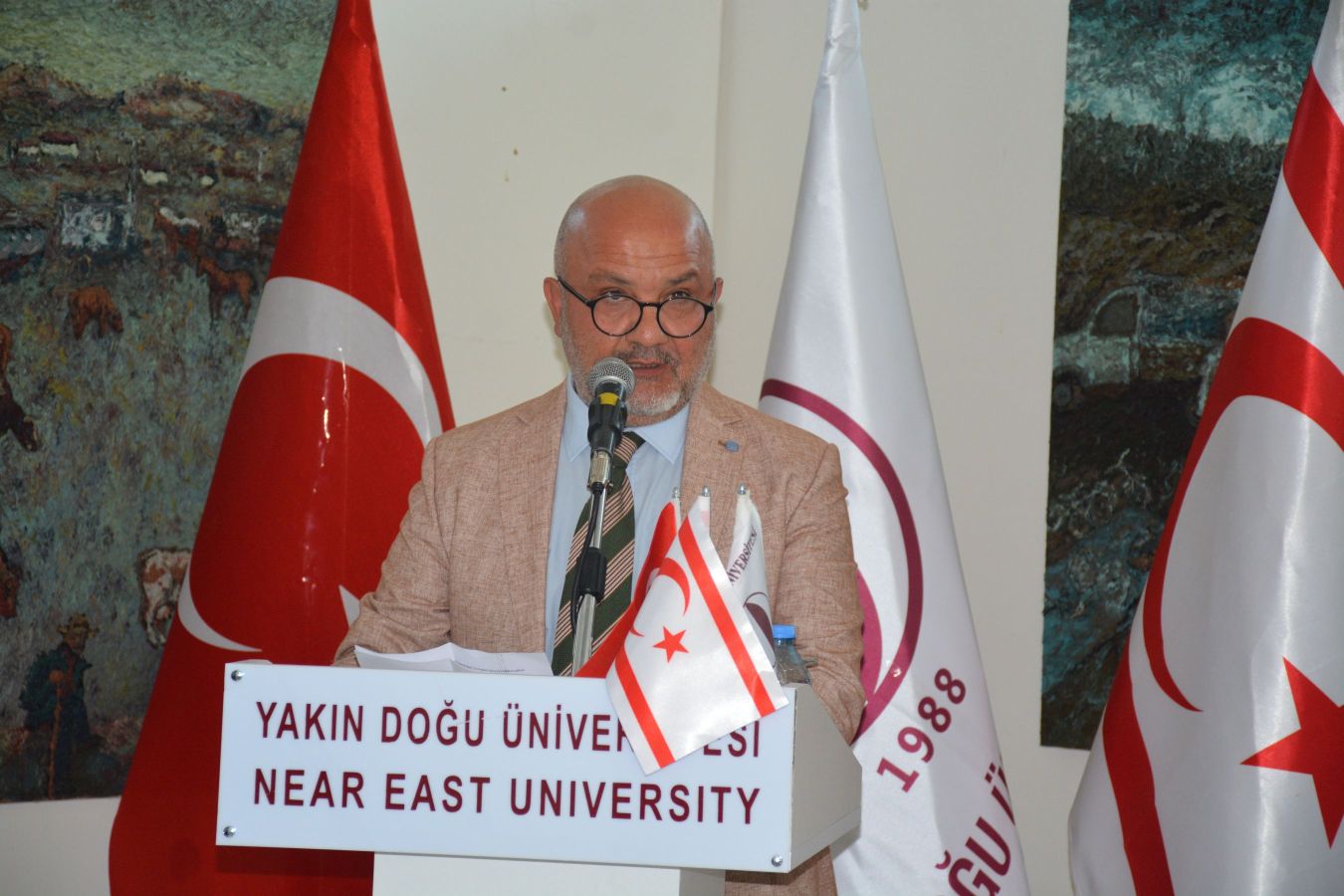 Prof. Dr. Tamer Şanlıdağ: “While we are integrating with the world on the one hand, on the other hand, we are trying to consolidate the roots of the Turkish Cypriots in these lands by taking strength from our roots extending to the motherland Turkey.”
Near East University Acting Rector Prof.Dr. Tamer Şanlıdağ, said in his speech at the opening of the exhibition that with the traces of the four solo exhibitions opened, the Near East University and the Cyprus Museum of Modern Arts symbolizes the mission of bringing the TRNC together with the world, building bridges with the Turkish World, and rooting in these lands by taking strength from its roots.

Stating that while integrating with the world on the one hand, they are striving to consolidate the roots of the Turkish Cypriots in these lands, on the other hand, by taking strength from the roots extending to the motherland Turkey, Prof. Dr. Şanlıdağ “Under the guidance of our Founding Rector Dr. Suat Günsel and under the leadership of our Chairman of the Board of Trustees Prof. Dr. İrfan Suat Günsel, this has been our most important goal and mission. In the coming months, here are the most special works of this mission and guidance; We will put Dr. Suat Günsel State Primary School Famagusta into the service of the Turkish Cypriot people, on August 19, and it will be handed over to the Ministry of National Education.” Prof. Dr. Şanlıdağ said, “After the state primary schools in Nicosia and İskele, which are at the service of the children of the country, this will the third full-fledged Dr. Suat Günsel State Primary School in Famagusta in the new education year.”

Emphasizing that the efforts to raise the lives of the people of Famagusta and Iskele region to world standards will continue, Prof. Dr. Şanlıdağ said, “While the Near East University Yeniboğaziçi Medical Faculty Hospital will meet the health needs of the region, we will open the doors of a unique wealth of information with the Near East Yeniboğaziçi Campus Grand Library in November. The new institutions to be opened will be the lifeblood of our roots in these lands, together with our indoor gym, which we opened on our Yeniboğaziçi campus last year, and our institutions that provide education at all levels, from kindergarten to college.” 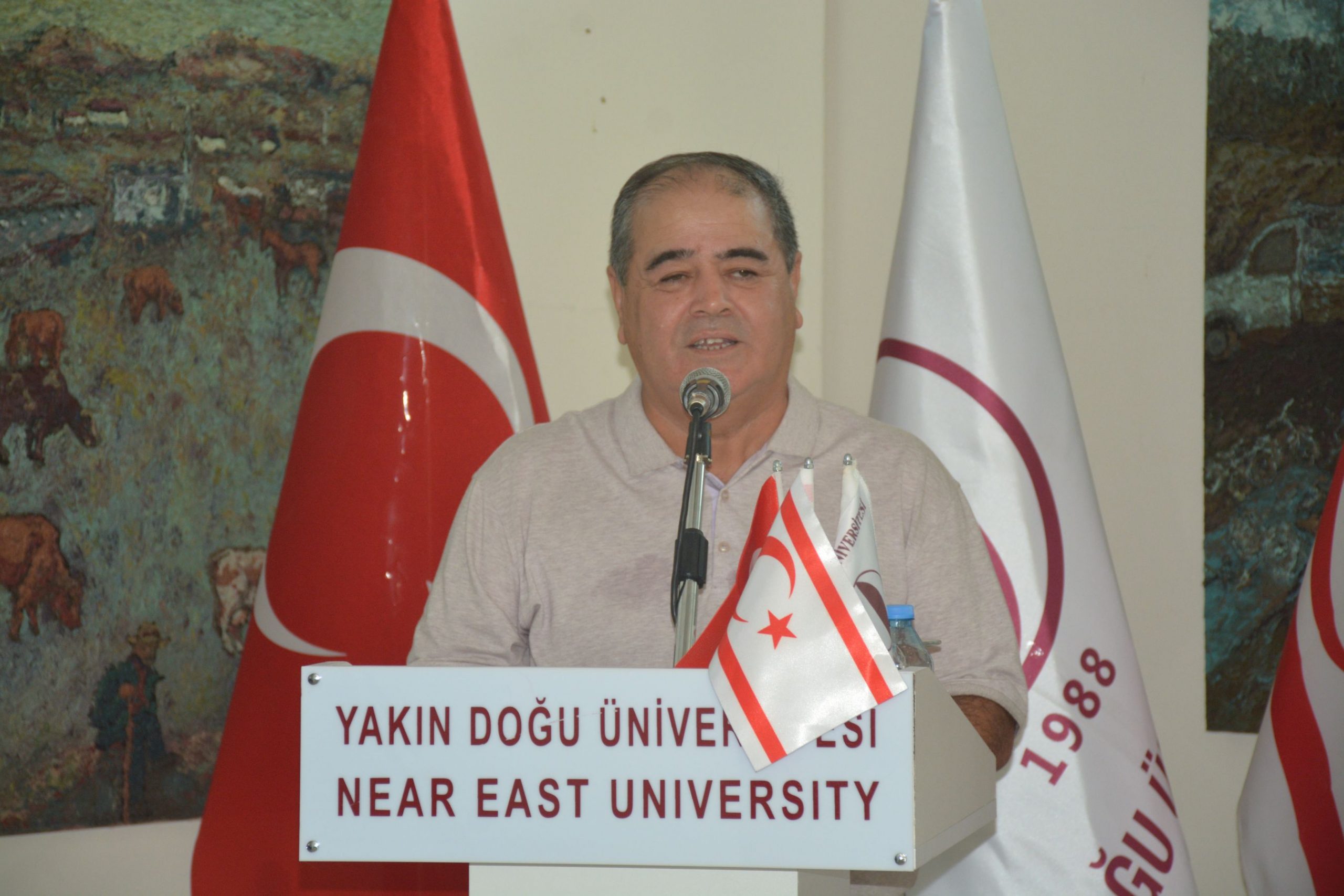 Khasan Aminov: “When the new building of the Cyprus Museum of Modern Art opens, it will create a worldwide sensation.”
Uzbek painter Khasan Aminov, who started his speech by saying that he was the rector of Kamoliddin Behzod National Art and Design Institute in Tashkent for many years, referred to the art atmosphere created by the Near East University and the Cyprus Museum of Modern Arts and said: I had the opportunity to visit world universities in France, Ukraine, Russia and in many other countries. But I have never seen a university that values ​​fine arts as much as the Near East University.”

Stating that he came to the Near East University for the first time in 2019 and participated in the art symposium, Aminov said, “The Near East University campus has turned into an art city like no other in just three years. I am very impressed. When the new building of the Cyprus Museum of Modern Arts opens, I think it will create a worldwide sensation.” At the end of his speech, Aminov celebrated Near East University Founding Rector Dr. Suat Günsel’s 70th birthday saying, “I would like to congratulate you on behalf of all Uzbekistan artists and myself. I wish you good health, long life and success in all your endeavors.” 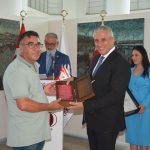 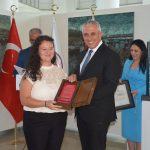 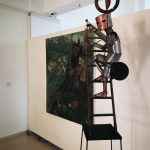 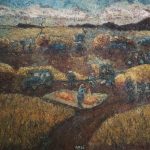 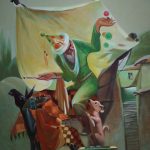 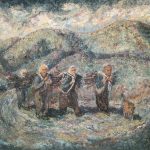 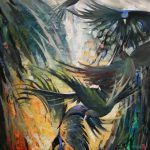 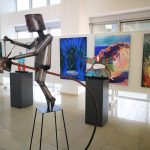 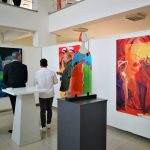 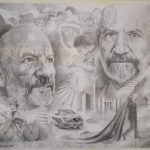