Almagul has exhibited her works in Central Asia and overseas. Just some of the exhibitions in which she has participated include “Woman East and West” and “Women Painters of Turkey and Kyrgyzstan” in Bishkek (1995, 1996); “Painter of Kyrgyzstan,” which toured Switzerland and Malaysia (1997, 1998); the 70th anniversary celebration of Ch. Aitmatov in Brussels, Belgium (1999); and two solo exhibitions with artist D. Nurgaziev (1999).

She was awarded third prize at the “The World through the Eyes of Artists” contest sponsored by the Soros Foundation (1997). She also won a prize at the 70th anniversary celebration of Ch. Aitmatov. Today, many of her works can be seen in private collections throughout the CIS, Canada, Turkey, USA, and Cyprus. 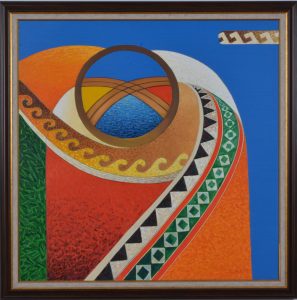