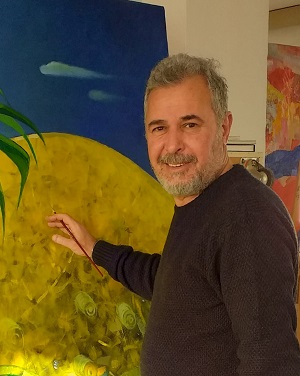 Faculty member of Near East University, Department of Painting and Teaching, Artist Assoc. Prof. Dr. Murad Allahverdiyev will present his 25 artworks with an exhibition titled “Breezes from the Island” to the taste of art lovers for the Cyprus Museum of Modern Arts at the Faculty of Dentistry exhibition hall.

In the information given by the Press and Public Relations Directorate of Near East University, the artist painted oil paintings in classical technique and painted landscapes in the forms of impressionism and post-impressionism. There are also traces of Cubism in his works. The artist's personal exhibition, "Breezes from the Island", will open on Wednesday, July 29, 2020, at the exhibition hall of the Faculty of Dentistry at 09:30.

Some of his works are;

His work, which he called the Old Monastery, reflects the monastery from the Byzantine time, located near the village of Kozan, made in oil painting and Cubism technique with a geometrical form.

In his work called Sunset, the artist reflected the romantic reflections of cypress trees at sunset in the garden of a house in Cyprus. Also, the harmony of the colors in the garden is striking in the painting.

In the artwork titled "A Glance at Karmi Village", the artist Allahverdiyev tells the mysterious story of a mysterious garden and trees hanging from the garden in the village of Karmi in Kyrenia district. The artist also interprets the view of the garden on the street and reflects the empty street as calmness, the sound of silence in the villagers' lifestyle.

In the study called Garden in Lapta, he reflects the unique spring and water in the village of Lapta, which turns the region into a garden of paradise.

In the Artist's artwork titled Nicosia Landscape, he magically carries the harmony of the palm, olive and jasmine trees on the streets of Nicosia to his canvases.

Who is Murad Allahverdiyev?
He was born in Baku, Azerbaijan in 1960. He studied at A. Azim-zade Art College between 1975-1979. In 1979 he entered the Academy of Applied and Decorative Arts of Ukraine in Lviv. He returned to Baku in 1989 and started teaching at the State Institute of Art in 1990. In 2000, he started to work for the Azerbaijan State Art Academy. In 2004, he became an assistant professor of the Department of Applied Arts at the Academy of Arts. Since 1991, he has been a member of the Union of Soviet Socialist Republics and the Union of Artists of Azerbaijan. Since 1985, he has been participating in national and international exhibitions. He became a member of Association of European Artists in 1987. Murad Allahverdiyev opened 9 solo exhibitions and his first solo exhibition was opened in 1986 at the Lviv National Gallery.

His solo exhibitions opened in 1987 in Warsaw, Hungary in 1988, and in Baku art center in 1997. He has been participating in many national and international exhibitions since 1987.

2004 - Participated in the exhibition of 10 Azerbaijani artists in Paris

The artist, who has been in the Turkish Republic of Northern Cyprus since 2007, has been working at Near East University, Faculty of Fine Arts and Design, Department of Plastic Arts since 2013. He is the bearer of the "Artist of the Year" and the European Artist diploma.